The Wardogs are a militia gang that appear in Manhunt.

The Wardogs are a sadistic paramilitary gang of Hunters composed of war veterans, huntsmen, soldiers-for-hire, and survivalists. They patrol the abandoned Carcer City Zoo and are headquartered in the Darkwoods district. The Wardogs are well-organized foes, operating militia-style and receiving all their orders from Ramirez. They wear a variety of camouflaged clothing, bullet-proof vests, plaid shirts, trucker caps, and face paint. Some also wear full-on ghillie suits.

The Wardogs are skilled hunters, often setting traps or ambushes for Cash and using squad tactics to flush him out of hiding. Wardogs are just as deadly up close, hacking away at Cash with machetes. Unlike some of the other gangs, the Wardogs express genuine satisfaction in killing the runners for Starkweather's movies and treat them like trophy kills; some even talking about skinning Cash's corpse. They can also be heard communicating with army phrases and codes. Although the Wardogs are dangerous in groups, some members lack discipline and easily lose their temper when Cash gets away, leading them to wander off in pursuit.

Their weapons of choice are the Machete, the Tranquilizer, the Revolver, the Sniper Rifle, and the Shotgun.

The Wardogs first appear after Cash leaves the Junkyard and is apprehended by Cerberus operatives, who drop him off at the Carcer City Zoo entrance where he encounters several Wardogs lazily patrolling the ticket booths. Cash makes his way deeper and deeper into the abandoned zoo, fighting off increasingly large numbers of Wardogs. After clearing the area, Cash finds out that the Wardogs have taken four members of his family hostage and he sets out to free them. He frees them one by one while killing every Wardog in his way. After liberating all of his family members, he shoots his way through a final wave of Wardogs before being picked up by Cerberus again.

The Wardogs have their final appearance right after Cash escapes from the Darkwoods Penitentary and finds himself deep inside Wardogs territory in the Darkwoods district. He slaughters the rest of the Wardogs in a huge apartment complex that they have claimed, along with Ramirez who cowardly escapes from the apartment before he is cornered and killed by Cash. While Cash is running from the scene guns can be heard going off implying Cash did not kill all the Wardogs. After this, The Wardogs are never seen again. 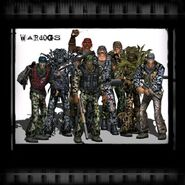