"He thinks he escaped justice, but we got our own kind of justice lined up for him."
- Skinz member

The Skinz are a gang of white supremacists that appear in Manhunt.

The Skinz are a group of Hunters comprised of white supremacists, white power skinheads, and Neo-Nazis. They patrol their Junkyard turf aggressively in baboon packs and brutally attack trespassers. Members wear traditional skinhead attire, including black shirts, camouflage pants, army boots, shaved heads, and suspenders. Many Skinz also wear hockey masks to intimidate their foes. Some of their hockey masks are painted to resemble the Confederate battle flag. They also wear clothing and armbands that are covered with mock Nazi symbols resembling the Odal rune (ᛟ).

Skinz members can be heard swearing allegiance to the Aryan Brotherhood, spouting off extremist and fundamentalist views or expressing hatred towards other races. Several of the Skinz talk to themselves about wanting to make their dead fathers proud of them.

The Skinz believe that Cash is a mixed-race "mud blood" or "half-breed," and hunt aggressively for him, although that may have been a lie told to them by Ramirez or Starkweather to give them further motivation to kill Cash. Many of the Skinz are also violently sadistic, having joined the hunt for the chance to kill. Their weapons of choice are the Metal Bat, the Nail Gun, and the Knife. Compared to the Hoods whom Cash faces in the previous scenes, the Skinz are better equipped, and are more willing to work together.

Cash first encounters the Skinz after getting dropped off at Denton's City Junkyard by Cerberus operatives. A group of Skinz are seen being given orders to by Ramirez at the beginning of the scene. He makes his way through the scrapyard and kills off the many Skinz patrolling it. As Cash ventures deeper into the junkyard, he uses two magnetic cranes to clear junk blocking his path and picks off the remaining Skinz. As he leaves the junkyard, Cash is snatched by Cerberus again and the Skinz are never seen again. 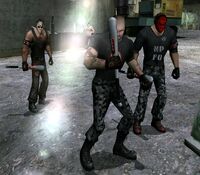 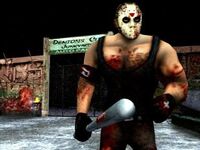 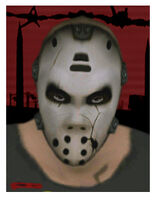 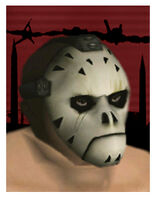 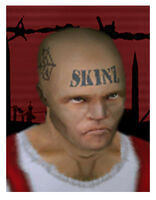