Wikihunt
Register
Don't have an account?
Sign In
Advertisement
in: Weapons, Blue Class Weapons, Weapons in Manhunt,
and 2 more

The Revolver, also known as Revolver Six Shooter and .38 Revolver, is a Blue Class Firearm appearing in both Manhunt and Manhunt 2.

The Revolver is one of the more basic firearms, with a slow fire rate and slow reload time. It's range and damage is around average. It can only carry 6 shots and the player can carry up to 30 spare bullets. In both games it appears to be based off a Smith & Wesson Model 686.

In Manhunt, it is the first firearm encountered by the player and it's first seen carried by the Wardogs guarding Cash's Family, but with little ammo. If the guard sees Cash, a family member will be shot and killed.

Later on, when Cash is dropped off at Carcer City Mall, he is instructed to find a Revolver inside the nearby Laundromat and engage in a shoot out with the Innocentz, who also use revolvers. After this it appears as a secondary weapon for the Innocentz as well as the Smileys. It is then seen used by the CCPD along side many other firearms they carry.

At the end of the game Starkweather will wield a Revolver in an attempt to stop Cash from killing him. 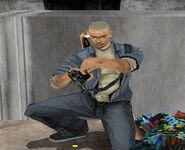 The Revolver execution on PS2/PSP

Danny finding a revolver under the bed

One of Cash's family members getting executed

An Innocentz member with a Revolver

A beta screenshot of Leo with a Revolver

Firearm executions can only be performed in Manhunt 2

Danny hits the hunter on the back of the head with the base of the gun, causing the hunter to fall to his knees. Danny then spins the hunter around and puts the barrel of the gun in hunter's mouth, the hunter stands up with his hands in the air. Danny then blows the hunters head open and lets him fall to the ground. He then shakes the blood and brain matter off of the gun.

PC/Wii
Note: The Revolver shares executions with all Blue Class Firearms on PC/Wii.

As the hunter turn around to face Danny/Leo, Danny/Leo aim the revolver toward the hunters head and fires.