"They're going to be screaming your name boy, mark my words!"
— Starkweather, to Cash.

Lionel Starkweather, also known as the Director, is a major character and the main antagonist of Manhunt.

The twisted mastermind behind the whole scenario, the Director communicates to James Earl Cash through an earpiece until Cash kills the White Rabbit. He tells Cash where to go and sometimes gives instructions on performing certain special tasks.

Starkweather's personality is ultimately that of a perverted and immature psychopath who is utterly devoid of any form of moral compass, empathy, or remorse.

He is very impatient and shows absolutely no regard towards anyone's death. He gets very excited after Cash kills a hunter and becomes annoyed to the point of throwing childish tantrums if Cash waits around too long.

He is also shown to be manipulative and dishonest, as Starkweather promised Cash to release him if he participated in his snuff films. However, in reality, he was planning to have Cash murdered by the Smileys (as hinted by his dialogue during the scene Kill the Rabbit). Another example is after Cash rescues his family members, Starkweather heartlessly orders the Innocentz to execute one of Cash's relatives.

Starkweather is motivated not only by his sadistic and hedonistic impulses, but his own psychotic beliefs as well. Although he's producing snuff films for the black market, Starkweather still views himself as a great director and artist. Many of his quotes praising Cash's executions revolve around a delusional belief that he will make him "a star" and bragging that Cash will "turn the slash world on its head".

Despite all the countless indirect murders he's committed, Starkweather ultimately proves himself to be a coward. He relies on Ramirez or the Cerberus into doing the dirty work for him while hiding in his secure mansion. When Starkweather is confronted by Cash at the end of Manhunt, he attempts to kill him with a revolver. However, Starkweather resorts to running away and futilely attempts to negotiate with Cash into sparing his life after he runs out of ammo.

Although the Director seems to hold all the Hunters he employs in low regard and regularly insults them, he seems to reserve particular disdain for the Skinz. He appears to be disgusted with their overt racism, referring to them as "dumbass supremacist bastards", stating they are "always blaming others for their inadequacies." Before directing Cash in the scenes they feature in, Starkweather encourages him to brutally kill the Skinz, telling Cash to "butcher 'em... cut 'em up, beat 'em down, and choke the fucking life outta them!".

Lionel Starkweather was once a successful Vinewood film director, until his movies started to flop badly and his career was finished. Later, he moved to Carcer City and developed an obsession towards morbid acts of violence. Soon, Starkweather began producing underground pornography and snuff films, which he sold to certain Japanese businessmen.

His newfound success made Starkweather very rich, allowing him to open an illegal company named Valiant Video Enterprises. Eventually, Starkweather began working with various criminals, like Mr. Nasty, and hired local psychopaths (including Ramirez) to serve him. Starkweather also employed a group of mercenaries, known as the Cerberus, to serve as his personal bodyguards.

At one point, Starkweather exacted his revenge on those who ruined his career by filming their murders in a video collection he entitled Director's Cut.

Starkweather begun paying off the CCPD police chief Gary Schaffer, allowing him absolute control over Carcer City and all the gangs participating in his snuff films. At one point, he purchased a mansion, which was designed by the Las Venturas Planning Department and built in Wapona Hills. With all this power, Starkweather remained isolated in his mansion, watching everything through security cameras and paying people to do all his dirty work.

"Cash, I made you!" - Starkweather's last words before Cash executes him

At some point, a Journalist discovered Starkweather's snuff film ring and begun gathering evidence against him. Meanwhile, Starkweather found out about James Earl Cash and decided to direct a movie starring him. In doing so, he bribes the police and prison officials into releasing Cash from death row.

Cash is given an earpiece so Starkweather can talk to him and instructs him to perform various tasks, while Starkweather watches and films it through security cameras. He also has many sections of the city blocked-off by electric fences, which he can open once Cash has completed a task. He has the Cerberus transport Cash to each location, while Ramirez organizes the Hunters.

He soon has Cash's Family kidnapped for him to rescue. Regardless of doing so, Starkweather still has at least one of Cash's family members killed anyway and shows the footage to Cash, enraging him. Nearing the end of the film, Cash is set to die, but he managed to fight back and escapes. Starkweather even orders Ramirez to stop Cash, but Ramirez himself is ultimately killed by Cash. He then has the corrupt police chief, Gary Schaffer, send police forces after Cash and the Journalist. Cash soon breaks into Starkweather’s Estate, and kills all the Cerberus guarding the compound. After an intense fight with Piggsy, Cash grabs Piggsy's chainsaw and enters Starkweather's office as he attempts to defend himself with a Revolver, but fails. Starkweather pleas for his life and tells Cash that "I made you!". Cash finally brutally murders him with a Chainsaw.

Starkweather and the Cerberus 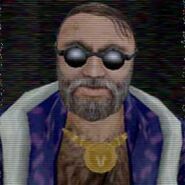 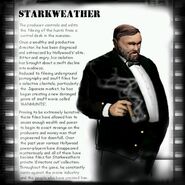 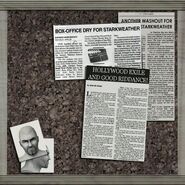 News articles about Starkweather's failure and pictures of beta Cash