"Trust no one, now GO! Run as far away as you can!"
— James Earl Cash, after freeing a member of his family.

James Earl Cash is the playable protagonist of Manhunt. A former inmate of Darkwoods Penitentiary,[1] he was freed from death row and set loose in Carcer City.

James Earl Cash was freed from death row and in return must participate in a snuff film, directed by Lionel Starkweather.

It would appear that Starkweather chose his candidate well, as Cash displays no outward emotion or regret, while butchering his pursuers and is no stranger to violence. Cash is shown to be very capable of making sure his enemies are dead, and his executions are nothing short of brutal. He is also quite comfortable with firearms and basic gun combat.

Cash remains rather emotionless and completely fearless throughout most of the storyline. However, he does display some sympathy for his kidnapped family members during one scene, and is furious when he sees them killed.

Cash is an extraordinarily dangerous individual, capable of inflicting fatal injuries using the most simple objects, such as the Plastic Bag.

Cash helped the female journalist by escorting her safely to her apartment, before telling her to get out of the city while she can, this could be simply because he has a strong sense of vengeance within him.

Cash also rarely talks, he is only heard saying "Oh shit!" during the scene Road to Ruin and "What the fuck...", he also orders around either the Journalist or the Tramp.

Only murder would give him the death penalty, therefore he must've killed a person or a few people before the events of the game.

Indeed, Cash was already a proficient and highly experienced killer before the events of the game.

The day of his execution, Cash is given a lethal injection and everyone believes him to be dead. However, he wakes up inside a closed down Coffee and Donuts store in Carcer Mark to find he was only sedated due to the works of Lionel Starkweather, who had bribed the prison officials.

Cash is then forced to participate in one of the Director's snuff films in exchange for his freedom. Cash has no trouble in killing a gang called the Hoods as he plows through their turf, brutally killing them off until he is led to believe that he has finished his work. However, he's then ambushed by the Cerberus, who are on Starkweather's payroll, and is transported to another location.

He is then dropped by the Cerberus at Denton's Junkyard, where he must kill a gang of white supremacists called the Skinz. Cash kills them all as he makes his way through the location, using a crane to clear the path ahead, and reaches the exit. He is once again subdued and picked up by the Cerberus, before being driven to the next location.

Next, Cash must face a gang of war veterans known as the Wardogs at the Carcer City Zoo, until he learns they have his family hostage. He manages to save at least one member (Depends on the player) and kills all the Wardogs at the location.

Now Cash arrives at the mall, because the Director has arranged a special "screening" for him. He must find a tape and a video camera in the Carcer City Mall, while shooting out with a gang called the Innocentz. Once all the gang members are dead, Cash watches the tape which turns out to be footage of his remaining family member being murdered by an Innocentz with a Machete. In a rage, Cash picked up the heavy TV set and threw it against the ground, smashing it to pieces.

Cash then found himself on the mean streets of East Los Albos and was teamed up with a drunken hobo, much to his dismay. Starkweather instructs him to escort the Tramp to a cemetery, while slaughtering more Innocentz along the way. He is then forced to clear out the remaining Innocentz at the Carcer Chem Factory, and after succeeding tries to makes a run for it but is caught once again by Cerberus.

Cash is then dragged back to Darkwoods Penitentiary to face his former fellow inmates, who have taken over the asylum and called themselves the Smileys. Cash makes his way through the asylum, killing all the Smileys, until coming across the White Rabbit, who Cash is told to follow. The rabbit leads Cash into many traps, where he is attacked by the Smileys, until he enters one room filled with heavily armed Smileys which is the point where Starkweather had planned for Cash to die (thus betraying him). However, through sheer skill or bloodlust, Cash manages to stay alive and slaughters the remaining Smileys, some of the Cerberus assigned to finish him off if the Smileys failed, and finally the White Rabbit who led him into the ambush. Cash finally breaks free of the Cerberus and escapes from the prison.

Now Cash is on the run from Starkweather, who sends Ramirez out to capture him, which he does, but decides to toy with Cash first. Cash is placed in a fenced-out yard outside the Wardogs Apartment, for the Wardogs to hunt him down. Cash kills them and enters the apartment building, killing all the Wardogs and Ramirez in the process. After killing Ramirez, Cash escapes the location by running through the door, with several gunshots are fired, which means Cash didn't kill all the remaining Wardogs.

While running away from the remaining Wardogs, Cash is picked up by the Journalist and he helps her by escorting the woman to her apartment in Central to gather evidence to bring down Starkweather. Along the way, he kills multiple CCPD officers who have saturated the neighborhood following orders from corrupt Police Chief Gary Schaffer to kill them both, who was himself given the order by the Director. After collecting all the evidence the Journalist needed, Cash instructs the Journalist to get out of town, to which the Journalist seems to be disagrees with Cash's decision (as the Journalist says "But... you are not coming with me?", when Cash tells her to leave). However, Cash decides to head to Starkweather’s Estate via the subway, making it all the way to the Stockyard Train Yard where he is cornered by a SWAT team. However, a squad of Cerberus kills the SWAT members before they can apprehend Cash, and recapture him for themselves.

After that, the police soon show up in Starkweather's estate. The police also discover the corpses of the Cerberus, Starkweather, and his snuff film ring. However, Cash has already made his run and he's nowhere to be found.

Before the release of Manhunt, there were several screenshot of Cash before his appearance was redesigned. In the beta, Cash wore a brown tank vest and had a beard, but his basic concept remained the same. Three beta Cash models can be seen hanging from crosses at Starkweather's Estate and many beta Cash heads on spikes can be found around the garden. A few more can be found in Darkwoods Penitentiary.

James at the Carcer City Mall.

Cash with the gasoline can. 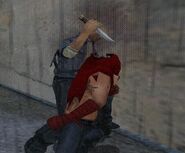 Cash executing an Innocentz member with a Knife. 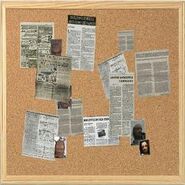