"Diablo, give me the gringo's eyes tonight."
- Skullyz

The Innocentz are a gang of Hunters who appear in Manhunt and are made up of Latino thugs, Satanists, sexual deviants, or the mentally disturbed.

The Innocentz are a vicious and well-armed gang operating out of the East Los Albos district. They're often seen using firearms, particularly revolvers or sawn-off shotguns, but are also armed with knives, hatchets, and sickles. They also prefer to use combined force instead of individual skill.

The Innocentz have two factions: the bulk of the Innocentz are composed of the Skullz (more commonly called Skullyz), a group of Latino goths, gangbangers (particularly Sureños), and Satanists who also belong to local gang sets such as Malos or Muerte 187. They wear dark colored jeans, track pants, wife beaters, or torn hoodies along with Grim Reaper masks, skull-face paint, and gang tattoos.

There are also the Baby Faces, a group of overweight perverts and mentally unstable murderers who Starkweather hired to add muscle to the gang. Their name comes from the creepy porcelain doll masks with oversized glass eyes they wear. They usually wear Hawaiian shirts, flannel shirts, brown or blue jean pants, pajama trousers, sneakers, and slippers.

Many of the Skullyz seem to be high on drugs, and can be heard mentioning peyote. They also can be heard muttering to themselves about a dark clairvoyant figure guiding them to kill Cash, along with curses and angry groans. Most of the Baby Faces, meanwhile, are genuine psychopaths and pedophiles who add a distressing contrast to the Skullyz; many of them are suggested to be intellectually disabled, acting in a disturbing child-like nature.

During the events of Manhunt, Ramirez is seen giving orders to the drunk and high Innocentz from inside the abandoned Carcer Church. After Ramirez dispatches the Innocentz throughout East Los Albos, Cash raids an abandoned mall claimed as Innocentz turf. Following Starkweather's instructions, Cash fights through the mall and witnesses the death of his family at the hands of the Baby Faces at the conclusion of this scene.

After escaping from the mall, Cash is forced to escort a Tramp through the streets and back alleys of East Los Albos which are being aggressively patrolled by the Skullyz. Cash leads the Tramp to a graveyard behind Carcer Church where he engages in a shootout with several members of the Innocentz before dropping the Tramp off and completing the scene.

After arriving at a massive chemical factory, Cash methodically wipes out most of the Innocentz and they are never seen again in-game .

(Innocentz member since 1998); Jules: "You may have seen me in Starkweather's film "View of Innocence". I'm looking for some freelance work. Are you trying to track somebody down? Someone who hasn't paid their debts, or a person that wronged you somehow... well I can find them, and make them PAY! I don't stop till I catch my prey." 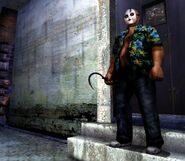 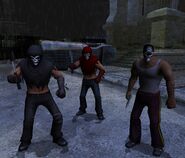