"We're all waiting for you. Come on you freak, make a move!"
-Cerberus soldier

The Cerberus are the final group of Hunters appearing in Manhunt. They are a highly organized and effective mercenary force who work for and protect Lionel Starkweather.

The Cerberus are Starkweather's private army hired to protect him and his Estate. They also help in the production of his snuff films by setting up cameras, blocking off streets and transporting James Earl Cash from location to location. They later mercilessly hunt for Cash in Starkweather's Estate.

As befitting their presence late in the game outside of cutscenes, the Cerberus are highly trained and efficient killers. Most of them appear to be from military backgrounds, as they have a great knowledge of military tactics, training and phrases.

They can be heard communicating in code and discussing military tactics to use against Cash.

Some Cerberus are also former government agents[1], and the experience that those individuals bring to the table is a testament to their overall high levels of professionalism and skill.

The Cerberus are armed to the teeth with Heavy Handguns, Shotguns, Assault Rifles, and occasionally Sniper Rifles.

It is uknown wether the Cerberus depicted in-game are exclusively Starkweather's private army, or wether they are part of a larger organization serving multiple illicit clients.

The Cerberus first appear once Cash has killed off most of the Hoods and made it past the Carcer City Library, where they ambush him. Cash is startled as they quickly beat him down and throw him in the back of their Securicar. They drop Cash off at Denton's Junkyard to fight the Skinz. After the Skinz have been defeated, the Cerberus capture Cash again and take him to Carcer City Zoo to battle the Wardogs. After Cash has escaped the Zoo, the Cerberus take him to the Carcer City Mall to collect a tape and camera. Once Cash has killed all the Innocentz at the Carcer Chem Factory, he tries to run but is captured again. He is then taken to Darkwoods Penitentiary to face the Smileys.

Starkweather had intended for Cash to be killed by the Smileys at Darkwoods Penitentiary. However, Cash manages to defeat them all and heads for the exit, where the Cerberus are now guarding. Cash kills the Cerberus guards, and also kills the White Rabbit. Some Cerberus reinforcements then arrive and are also killed by Cash. The Cerberus later track down Cash and find him at the Stockyard Train Yard, where he is about to be captured by the SWAT. The Cerberus kill the SWAT police, subdue Cash with a Taser and take him back to Starkweather's Estate.

Despite Starkweather's orders to keep Cash alive, they prepare to execute him but are interrupted by Piggsy. They investigate the disturbance and are subsequently killed, allowing Cash to escape. They then patrol the mansion's outskirts, gardens and interior in search of Piggsy and Cash. Numerous Cerberus guards are killed by Cash and Piggsy. Once Cash has reached the interior of the mansion, they shut down the power to the elevators to prevent him from reaching Starkweather. Cash later turns the power back on and kills the Cerberus Leader to obtain the keys to the elevator. Once Cash has reached the office, the remaining Cerberus units are there protecting Starkweather. They are also killed by Cash.

A Cerberus killed by Piggsy 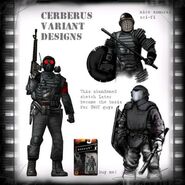 Retrieved from "https://manhunt.fandom.com/wiki/Cerberus?oldid=19572"
Community content is available under CC-BY-SA unless otherwise noted.