The Bloodhounds are a group of Southern hunters in Manhunt 2.

Just like The Watchdogs, The Bloodhounds are an organization hired by The Project to capture Danny and Leo. The group is made up of bounty hunters, war veterans, obsessed deer hunters, redneck thugs, etc.

They do their job mostly for the money, but also for the fun of hunting. They also in it out of a patriotic loyalty to America, often calling Danny an "American Traitor" and a "Communist". They enjoy their job more than your average hunter. They have much help from helicopters and by other Bloodhounds and are heavily armed; they also hunt in groups and are very skilled at what they do.

They appear in the missions Most Wanted, Broadcast Interrupted and Altered State.

Their weapons of choice are the Sub-Machine Gun, the Shotgun (w/ flashlight), the Baseball Bat, the Crossbow, the Assault Rifle, the Heavy Handgun, the Light Handgun, the Flashlight and the Sickle.

Most Wanted: Just after the Watchdogs fail to catch Danny and Leo at the Bees Honey Pot, the Bloodhounds arrive and chase Danny through the sewer and streets of Cottonmouth, with the help of the remaining Watchdogs and their helicopter which circles the sky, but many of them are killed and Danny and Leo carry on.

Broadcast Interrupted/Altered State: A few weeks after Dr. Pickman's death, the Bloodhound find them hiding at the TVMK Studio. The hunt ends with a shoot-out in the parking lot, before Danny makes it out side where more Bloodhounds are patrolling, who are also killed. 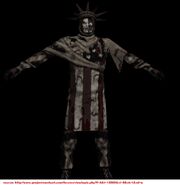 Unused Statue of Liberty Bloodhound model. Left in the files for Broadcast Interrupted.

A Bloodhound with a Sub-Machine Gun

The Bloodhounds blocking off a street

A Bloodhound being executed

Retrieved from "https://manhunt.fandom.com/wiki/Bloodhounds?oldid=19627"
Community content is available under CC-BY-SA unless otherwise noted.